An exciting day today as the first foal arrived  by our Full  Welsh Section D Cremello Licensed Stallion Tresorya Cornish Cream. A beautiful buckskin/dun filly born around 6.30am out of Tresorya Derwena Lwcus by Derwen Royal Express. She is really smart with 4 whites and a Star. A large foal which should mature to a good height. This mare has produced some super foals to date! 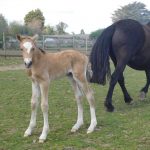 What a great start!